Upon searching it out, I found that a few other people had done this, but I wasn’t able to find a recipe that matched, well… mostly what I happened to have in the house when I was struck with the desire to cook this.

This is all my guesses on the measurements after the fact.

In one pot, get your quinoa cooking. In a pan, start cooking your onions and bell peppers with a generous drizzling of sesame oil. Once they are closing in on how cooked you’d like them, put your mushrooms and garlic in 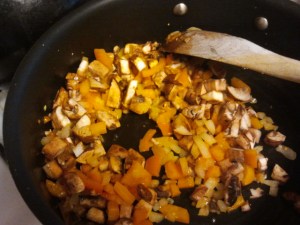 This is what mine looked like at this point. Then I put in the carrots and water chestnuts. I wanted them to still be a little crunchy. I sprinkled ground ginger on top, and then mixed in the cooked quinoa. Pour in soy sauce to taste and serve on romaine lettuce.

Everyone loved it. Next time I’m planning on putting in a little honey, and the rest will vary based on what’s in the house, but the bones of the recipe was awesome.

I got the idea to cook pancakes in the oven from a friend, but then I decided to make it a little more fun.

Here they are before going in the oven 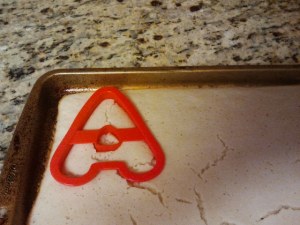 Just flip it over to serve 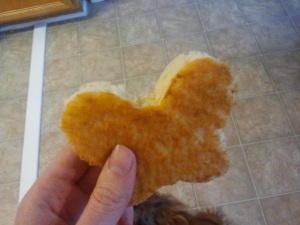 I’ve been meaning to do this for a very long time, but I’ve somehow ended up with free or crazy cheap detergent for the last two years. (Tough life, right? 😉 ) I actually still have some from the store, but I got impatient.

I made this in the beginning of December and this is how much I have left. Most of the recipes I read said 1 tablespoon per load, but I always 2 because that seems so teeny. The second picture is of my tablespoon scoop to give you an idea of just how much detergent is left. I’ll be using this forever! That said, my laundry always smells so fresh now. It’s been especially nice for my towels, which I always felt like I was fighting the water funk smell with. Not anymore. 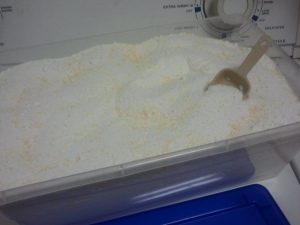 This is what I ended up doing after reading- I don’t know how many recipes.

I wish I had written down the exact pricing, but as I recall, the total came out to something under $20 and I figured out that using 2 T would make it 2 1/2 cents a load. It would be even cheaper if I had used off brand oxi clean or had a coupon, but I was afraid to try on off brand for something I knew nothing about, on a project that would produce this much stuff I would have to use….

Anyway, I grated the bar soap in the food processor, and then I send it through again with the blade to make it powder. After that I poured it, along with everything else into a trash bag and mixed it up. Don’t do this in the kitchen, by the way. No reason, other than the powder that will try to escape everywhere.

That’s it! It was very fast, and I LOVE the final product.

Since we have a little family, I take half of it right away and put it in the freezer. This freezes very, very well. Make sure to let it thaw before reheating or you’ll have mushy vegetables. I also go ahead and freeze the rest of the coconut milk. It effects the texture a bit, but it doesn’t matter if you’re going to cook with it.

Combine everything in a saucepan and let simmer. We like it chunky so I don’t add very much water at all. Serve with regular tortilla soup fixings.

The next day, I drain what little liquid there is off, add some cottage cheese, and I roll it into corn tortillas. I put it in a casserole dish, and cover with cheese and enchilada sauce. Tada, easy dinner for two days.

I wish I had taken a picture of dinner, it looked so fancy, and tasted even better. I realized too late that I didn’t have everything I needed for dinner today, so it was a oh-junk-what-will-we-feed-everyone kinda day.

In one pan we had onions and bell peppers sautéing in bacon grease. I know, not my usual go to. And in the other I had purple potatoes cubed. I cooked them for about 10 minutes in blood orange EVOO (so good!), then combined the two pans, also throwing in crumbled bacon. The now empty pan took on the task of making scrambled eggs. There was two of us in there cooking, hence the slightly less than clear series of events, but I just want to remember that those home fry potatoes with eggs, were to die for. Yum.